These days, it seems like everybody wants to start a fashion blog, or a recipe blog, or a travel blog, or a parenting blog, or a make money online blog (nevermind that most of the people who start them have limited or no experience at actually making money online). While any of these topics can be great money makers, they're crowded. The competition is fierce, and it can be a struggle to break in.

Maybe you don't feel up to that challenge, or maybe it's just that you don't want to make one more generic blog about saving money and starting a blog. The good news is that you don't have to. There are TONS of profitable niches outside the big 5 topics – or in sub-niches of the big, broad topics.

As I type this, I run a British TV site that's doing very well. Last month, it came in around 150k pageviews and more than $5000 in revenue (more than $4k profit). It's growing steadily, and we're (my fiance and I) having a great time writing posts, interviewing celebrities, and publishing books. So much fun, in fact, that I've been dialing back my client work to give myself a bit more time to work on it.

The goal of this post isn't to say, “Hey, go do one of these topics!” You may not love or even like ANY of them. That's okay. The point is to show you that there ARE blogs earning good money in a variety of niches. You don't HAVE to be the world's 10 millionth recipe blogger if you don't want to be.

If you do decide to go outside the more popular blog niches, my only extra bit of advice would be to make sure there's an audience and figure out how you intend to monetize the site. If there's no direct link to any kind of product or program or service you can promote, it can be a little tougher to earn money. We'll talk about this side of things in more depth another time.

As you go through the example sites below, you'll notice quite a few of the sites are running ads from Mediavine. If you're not familiar with Mediavine, it's an ad network that requires a minimum of 25,000 sessions (roughly 30k pageviews) to get in. If you happen to see a site running AdThrive ads, you can be sure they've hit the 100k monthly pageview mark.

Despite the name, this has nothing to do with a woman's monthly cycle. It's a kind of TV show or movie that's set in another time period – think Pride and Prejudice or Downton Abbey. With the rise of streaming technology, more people are discovering how great these programs can be, and that means more people are blogging about it.

Some sites in this niche get as many as 200k+ monthly visitors, and there's definitely room to take that higher.

This isn't a particularly small niche, but for some reason people always seem a little surprised when I mention how well some pet blogs do. I used to have a bird blog that talked a bit about pet birds and a lot about bird products. It did well for the amount of effort I put in, and I eventually sold it when a buyer came along as another project was taking up a lot of my time.

After college, I spent a couple years in a day job before going full-time on my own. I was the Director of Marketing at a funny sort of company – a video production company that slowly transitioned into a gift company over the time I was there. When I started, one of their top products was a driver's ed DVD (they also made those fireplace videos you put on your TV).

I learned WAY more than I ever wanted to know about driver's ed, including what an incredibly huge and lucrative market it is. One of their affiliates routinely got 5-figure payouts from the company, and I found out they were making 6-figures monthly from some others. For those who don't go to schools that provide free driver's ed, it's pretty much a required expense, and you always have new customers coming of age.

Before I quit, I actually helped build a driver's ed blog the company could use to promote their own DVD + make money promoting programs and products that did things their DVD didn't. It was earning good money almost immediately. I can't disclose specifics on this one because it's their data – but if the topic interests you, rest assured – there's money to be made.

If you use an Alexa toolbar, you'll notice the first site listed below has a ranking around 34,000 (as of August 2019). Now, Alexa is a HIGHLY imperfect way to measure traffic – but when you see a site below 50k, you know they're doing huge numbers. For comparison, Paramount Pictures comes in at over 100k and Playboy is around 37k.

If you've browsed Target or Etsy in the last couple of years, you probably know succulents are cool now. I can't claim to understand what makes them so much more appealing than any other plant, but there you go.

I came across an interesting succulent success story a while back and found myself in a weird succulent rabbit hole. Then, there was another. And another. While not everybody is going to GROW succulents, I figured there must be some successful blogs on the topic. And there were. Some belonged to nurseries and didn't seem well-positioned to monetize the worldwide traffic they were getting – but where there's traffic, there's potential to make money.

I recently worked with a client in the LED industry, and over the course of my research, I was stunned to see what an enormous market it was. If I'm being completely honest, I kind of hate LED lighting. I've talked with people who know LEDs and I've tried all kinds of color rendering indices and color temperatures – even some that were quite expensive – but they just drive me a little crazy.

Still, they're here to stay. They're more energy-efficient, and the long-term cost of ownership is lower, assuming you buy good ones to begin with. That said, the majority of the LED lights on the market are pretty junky, so there is a lot of consumer education to be done about how to buy the right lighting for your needs. It's not a topic that interests me at all, but it goes to show there are TONS of niches out there. You could also be less focused and talk about lighting/lighting design.

While a lot of people talk about food and drink with no real specialization, you can actually do very well by niche-ing down to the topic that interests you most. I've seen bloggers who do well covering local restaurants, airport lounges, certain types of food or drink, and even rooftop bars (example below). If you provide information people want and you can get eyeballs on your page, you can make money.

Your blog doesn't actually have to be a blog in the normal sense of the word, where you write ongoing personal posts and build a relationship with your readers. A lot of people do very well creating WordPress blogs about specific household product niches – tools, outdoor items, even toilets. All the blogs below are currently displaying Mediavine ads, meaning they hit that 25k monthly sessions mark.

Almost any kid will tell you, LEGO is cool – but what you might not realize is that an awful lot of adults are into the hobby, and they spend a LOT of money. This is one of those topics where you definitely need to have some passion about the subject to do well, but if that's you, you'll find no shortage of opportunity.

If you've spent much time in rural parts of the US, you've probably met at least one or two preppers or survivalists. There's a whole spectrum of them, and they range from normal people who keep a few extra supplies around to full-blown crazies who hoard guns and ammo and learn the best ways to drink their own urine.

For some, survivalism is almost a game. They dream up different end of civilization scenarios and figure out how to prepare. It's weirdly fascinating, but I definitely hope they're wrong about the future. I really don't want to live in a world without high-speed internet and modern retail stores.

If you don't think about monsters and ghosts on a regular basis, this one is going to seem pretty strange. Are there REALLY enough people out there who want to read about Bigfoot and UFOs? Definitely.

At any given time, there are at least a dozen magazines on these topics, and the following is pretty passionate. They range from skeptics to nonbelievers who see it as a bit of fun to die-hard believers intent on proving that ghosts and aliens and monsters are real and among us. No judgment – it's a pretty harmless hobby.

Can you make it a business? Absolutely. While most of the sites out there seem pretty amateurish and poorly/minimally monetized, my advice would be to look at the magazines in the space and check out who's advertising. That's going to give you a great sense of which companies are willing to pay to get in front of that audience – and it will give you a better understanding of your potential readers. Checking out magazines is a great way to learn about pretty much any niche that interests you.

Fun fact – I actually got engaged at the Loch Ness Centre & Exhibition in Scotland. My fiance and I had always wanted to go to Loch Ness, and we absolutely love the UK (even the less attractive non-touristy bits). It's not that we believe in a monster that will rise up out of the depths – we just thought it would be good fun to go out looking, enjoy the scenery, and meet the super-cool guy who's been studying the Loch for decades. You can read the whole engagement post HERE if you're curious.

How Do You Pick a Niche That Will Make Money?

We'll talk more about this in a future post, but there are actually very few subjects you couldn't make work in one way or another. If you enjoy running a very broadly targeted blog about all kinds of things, great – you can make that work. This is just to show you there are tons of different topics, and you definitely don't have to stick to the old standards to earn a good income. 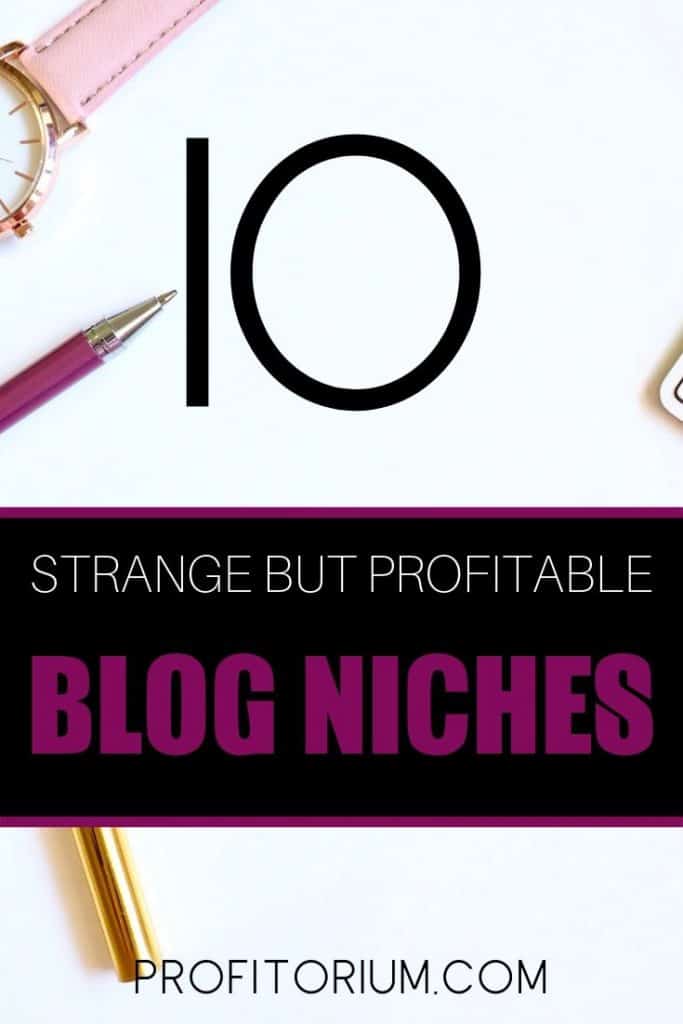