One thing I hear from a lot of new bloggers is that the only real way to make money is to blog about making money. As someone who's blogged about nearly everything under the sun over the last 15+ years, I can say with certainty that it's not true. I've made money blogging about everything from dinnerware and bedding sets to pet birds and t-shirts. If you're doing it right, you can make money on virtually any topic people are interested in.

To prove that point, I'm going to start sharing income reports for one of my blogs – an entertainment site – called I Heart British TV. Previously, I've only shared these details in David's private forum over at Aff Playbook.

Like a lot of income reports, I'm not going to be all fussy with the accounting. We'll talk about money in the month it's earned, not the month it pays out. I'll give a general sense of what expenses are like, but in the interest of saving time, I'm not going to go over every penny. Blogging is a high-margin business in most cases, so unless you're doing a big paid advertising campaign or dealing with at on of inventory, actual costs are extremely minimal – especially if you've been doing it forever and you're not spending much on courses.

I've run a lot of websites over the years, but IHBTV is probably the first one I've built with no financial goals in mind (aside from my lame attempts at personal sites back in the mid-1990s). For as long as I can remember, I've loved British television. As a kid, I used to stay up “late” to watch Cadfael on PBS. I remember a time shortly after college when I was broke and struggling with student loans and I desperately wanted to save enough money to buy the DVD box set of Hetty Wainthropp Investigates. Don't ask me why, I'm just a sucker for old lady TV.

Fast forward to fall of 2016. I got a nasty cold, and it turned into this horrible neverending cough that left me indoors for the better part of 2 months. I watched a LOT of British television, and one day, a lightbulb went off. “I should make a British TV website,” I thought. It's an interest I share with my mom and grandma, and my grandma often needs help finding shows and navigating the streaming options. I figured it would be useful to her and fun for me. Maybe some people would visit and I'd pick up a stray commission here and there, but it definitely wasn't the goal.

It didn't get a ton of traffic initially, but the audience was passionate. Almost immediately, I saw a trickle of sales coming through on Amazon links. I didn't have a lot of time to spend on it – I had clients and other sites making more money, plus I was taking a course over at Stanford that was keeping me fairly busy (the drive alone was 2-3 hours each way).

For the first year or so, I did very little with the site. There were times I didn't make a single post for months, but that tiny income just kept trickling in. By the next fall, search traffic was trending upward – first a couple thousand, then 5000, then 10,000/month by the end of 2017. That's when I decided it was time to start taking it a little more seriously.

Here's an excerpt from my first monthly report back in December 2017:

-Around 650 newsletter subscribers (though I've never sent a newsletter, the shame!)
-Around 20-30k/month in traffic, split mostly between Facebook and Google organic
-Income is hard to say. Pre-Christmas season, it was around $200-300/month, but traffic has increased, as has conversion rate since it's the holiday season.
-Under 300 followers on Instagram
-Just under 15k Facebook followers

It wasn't making nearly enough money to dial back my clients just yet, but I committed to writing more posts, working to deliberately grow the site, and tracking the income more carefully.

Throughout 2018, the site grew tremendously. David started helping out here and there. We switched from AdSense to MediaVine. We even published a book. I still don't publish as often as I'd like to, but I've recently dialed back on consulting a bit so I can spend more time blogging.

So Where Are We Now?

Since the most recent report I did over at AffPlaybook was at the beginning of May, that's my comparison point below. In the future, I'll use month-to-month, I just didn't grab the stats at the right time back in June/July. July numbers were given a nice mid-month boost by Prime Day, when a number of streaming services went on sale and the bounties stayed the same.

July Earnings:
(and remember, this is revenue, not profit – compared to April 2019, the last month we included here)

August is all about prepping for Q4. Last year, we sold over $8k in British TV Field Guides between November and December, and it wasn't actually released until the very end of November – and then, we had supply issues that kept sales down. This year, we'll be better prepared with more books released and more inventory on hand. 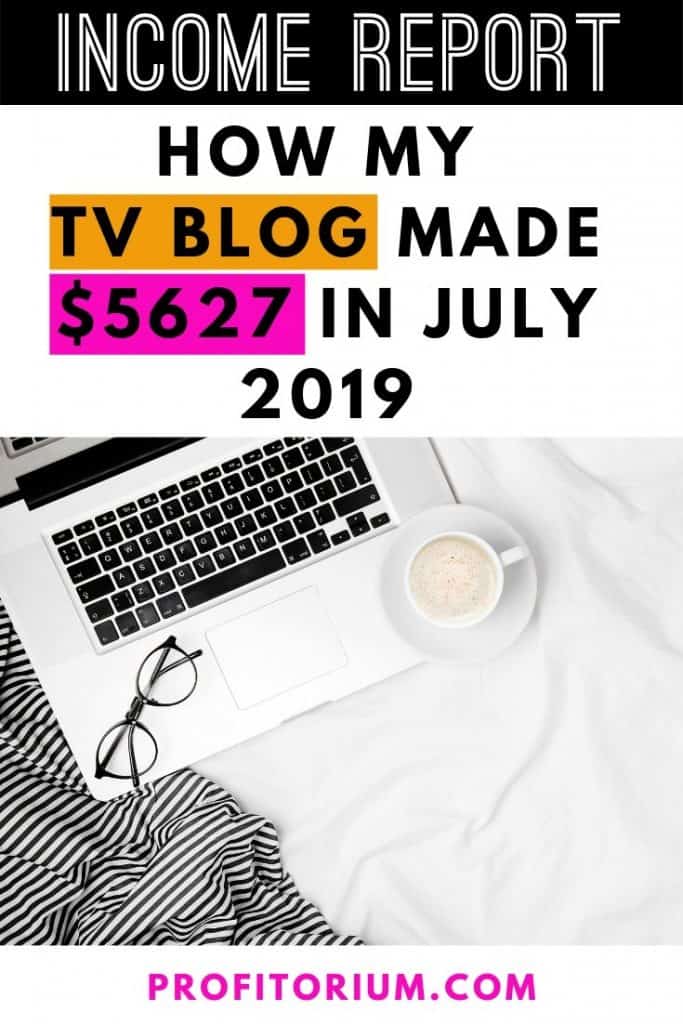